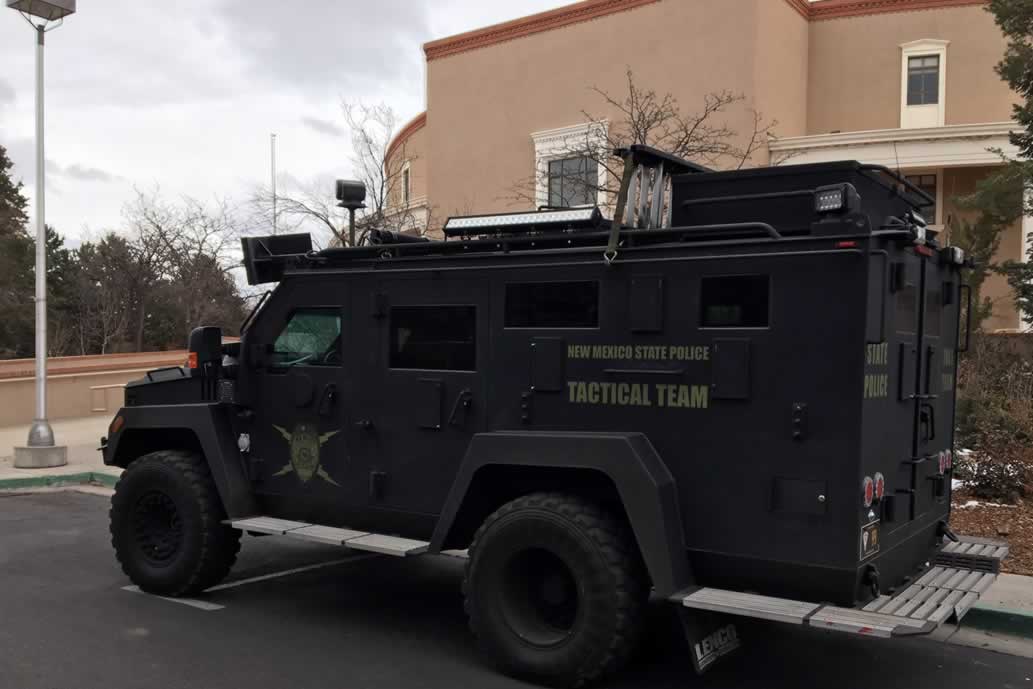 The opening of the 2021 Legislative Session was unlike any other, with unprecedented security and police militarization. The heavy security certainly added to the atmosphere of limited public access and transparency.

Most legislators stayed home and voted for leadership positions via Zoom, and the governor did not give a live State of the State on opening day but instead published a recorded speech a week later (video here). Notably the governor announced she was allowing schools districts, at their discretion, to open February 8th - but the timing was curious. The pandemic in New Mexico is still ongoing, so what made her decide to open schools now? We believe schools should have opened in the fall, a position supported by the American Academy of Pediatrics, which issued a strong statement in June of last year in favor opening schools. Parents across the state want schools opened, and in Las Cruces a group of fed up parents held a demonstration hoping that at the next meeting of the school board they vote to allow schools to open.

Back at the Roundhouse, the jockeying for leadership positions in the majority party did bring a surprise in the appointment of Sen. Muñoz as the replacement of John Arthur Smith as the new Chair of Senate Finance. Sen. Mimi Stewart made the appointment as the newly-elected Senate President Pro Tem, and although she denies it, it's fairly obvious she made the choice as part of a deal with moderate Senate Democrats in order to secure her own position.

The appointment enraged the progressives in the Roundhouse, who otherwise have seen little organized opposition this session. The Leftists in control have wasted no time pushing their agenda, as evidenced by the items first to be heard in committee hearings, including last year's failed abortion bill, mandated sick leave, and more job-killing environmental bills that will hurt the reliability and affordability of New Mexico's energy grid.

Finally, on a related note, President Joe Biden's push to ban oil and gas drilling on federal lands will hurt our state more than any other in the country: half of New Mexico’s oil and gas development occurs on federal land and the revenue generated accounts for up to a third of New Mexico's state budget. The silence coming from the majority party in the Roundhouse is deafening. While the governor and her progressive backers in Santa Fe love to spend our state's revenues, they have not made any attempt to break from the out-of-touch environmentalists controlling the new President's agenda. Tragically, hard working New Mexicans are in the crosshairs of Washington politicians, and our elected leaders (including those in Washington) are clearly more concerned about the checks they collect for their political campaigns then the well-being of New Mexican families. On a recent appearance former U.S. Energy Secretary Rick Perry calls out Governor Lujan Grisham and begs her to explain how New Mexico can possibly make up the massive hole left in our state's budget due to drilling ban in the video below:

But the action in the Roundhouse is just getting started. Hispanos Unidos will continue to be a watchdog for the New Mexican families ignored by the big government politicians driving the agenda in Santa Fe. As key legislation makes its way through the Roundhouse we will keep you informed of what you can do to join the fight.