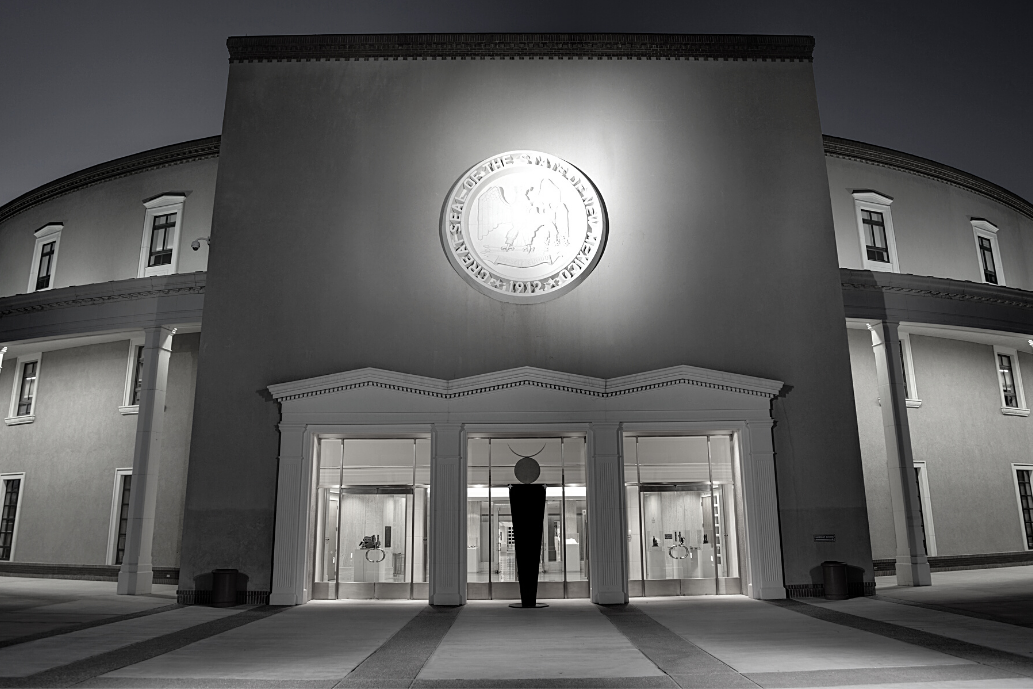 The 2021 Legislative Session echoed the strange year that came before it. Mandatory masked faces, plexiglass installations, police state jackboots, and nose-probe virus testing, all (or some of it anyway) captured on Zoom calls via low-resolution laptop cameras. What was not strange (though nonetheless disconcerting) was the lack of honesty, transparency, and accountability the people of New Mexico have sadly come to expect from our elected and appointed public officials (and their unelected unappointed unofficial partners: dozens of partisan “non-partisan” activist groups.)

Though there were fewer bills introduced due to a loosely enforced unofficial limit, there were still over 900 bills consisting of thousands of pages crammed into 60 days of backroom deal-making in a mad dash to take more of your rights, more of your money, and most of our dignity — all while patting themselves on the back for doing so on behalf of “the people.”

More and more your elected officials are setting up parallel power structures that abdicate authority through “advisory” roles. Although several committees and councils already exist, there were AT LEAST thirty-four proposed committees, councils, boards, working groups or task forces with OVER 430 members – most of them eligible for per diem and mileage reimbursement (SB 345 would raise their per diem, by the way.) Some of these entities have an UNLIMITED number of members and most of them have at least 13 members. And these ARE ONLY the ones that didn't die early in committee. These entities either duplicate or usurp the decision-making of the legislature and are usually handpicked by the Governor or radical progressive House/Senate leadership. Some are pointless (HB 14's Grant Opportunities Council) others are dubious (HB 222/227's Ethnic Studies Council) while some are counterproductive at best (SB 112 includes both a Sustainable Economy Advisory Council AND a Sustainable Economy Task Force!) These shadow governments will decide how the law will be carried out in real life, essentially behind closed doors.

Although expanding broadband access to rural and underserved communities sounds benign, at the end of the day the way the powers that be are going about it favors the politically connected and expands dependency on the state. Instead of allowing the free market to expand organically (for example, look at Elon Musk’s venture called Starlink), the state is using broadband "accessibility" to socially engineer a utopian scheme –the type of well-intentioned but disastrous social engineering that has resulted in New Mexico being at the bottom of the good lists and atop the bad. Of the 40 bills that contain references to broadband here are some of the most aggressive ones: HB 10, HB 86, HB 141, HB 169, HB 285, HJR 9, HM 23, SB 24, SB 49, SB 91, SB 144, SB 204, SB 253, SB 360, SB 361, SB 366, and SB 413.

Under the guise of criminal justice reform, the radical Left is taking dramatic steps to undermine society by fundamentally attacking law enforcement and enabling criminality. While we do see the urgent need for certain reforms to protect the rights of the accused and address corruption and abuse, these bills either do nothing to help (HB 40, HB 352, SB 141) or simply deny justice to victims of crime in favor of the perpetrators. For example, HB 74 and SB 114 would reduce sentencing for most criminal offenses –including 2nd degree murder and child sexual assault. When conservative legislators proposed to exempt killers and molesters from these prison reductions, they were rejected by the progressive majority voting in lock-step with the more radical factions. Other bills seek to create vulnerabilities for police officers acting in good faith as they try to do their job (HB 4, HB 254, HB 263, HB 286, SB 105, SB 227, SB 274) and would make life more dangerous for the average New Mexican. Although excessive and unlawful force by the police needs to be stopped, the problem lies more with the powerful unions who protect predatory officers and have refused to address the root causes in hiring and training.

Without even getting into the micro-aggressive redistribution schemes embedded throughout much of the legislation or delving into the Green or cultural Marxism, when it comes to classic centralized control of the economy through tax (HB 19, HB 122, HB 167, HB 291, SB 317) and regulation (HB 21, HB 268, HB 72, HB 205) there was plenty of radical activity this session.

Job killing policies like mandatory paid sick leave (HB 20 and HB 37) and long-term economic suppression policies that expand the welfare state and dependency will keep taking money out of the economy and make it harder for small businesses (HB 2, HB 44, HB 112, HJR 1, SB 42, SB 52) and will only drive out the entrepreneurs, producers, and creators we need to grow the pie and provide New Mexicans the means to put food on the table. Minimum wage increases have a dark history of racism and discrimination (HB 110 and HB 214) that hurt those without an education or experience while it protects the privileged. Thankfully, SB 35 did not make it to the floor. This bill would have made it nearly impossible for people mentally disabled to get hired. It is often very hard to tell the difference between bleeding-heart moderates who simply don't understand the unintended consequences of false economic theories from the radical ideologues that are more than willing to sacrifice some individuals for a greater good that can never become reality.

It seems rather disingenuous by Governor Lujan Grisham to try to label an upcoming special session for cannabis regulation as part of an economic development push. Ask the hardworking families of New Mexico — desperate for relief from government mandates and higher taxes — if calling for an $80,000 per day special session in order to legalize weed makes sense or if it’s just another example of how Santa Fe is out of touch with the needs of New Mexican families.

The special sessions starts tomorrow. As always, we’ll keep you posted on any notable developments.